Splinters From The Tree October 2007

This month I will be attending the 4th International Conference on Genetic Genealogy sponsored by Family Tree DNA. I hope to have an update on this conference in a future newsletter.

Merton Webster Bassett descends from #3B Thomas Bassett of Connecticut as follows:

Letterhead from a letter written to Albert E. Bassett of Huntington Park, California

In the development of commercial and realty enterprises in central Connecticut, Merton W. Bassett played a significant part. For a quarter of a century he headed his own retail jewelry firm in Hartford under the name of M.W. Bassett Company. Later in life he was active in real estate development in the town of Niantic.
Mr. Bassett, whose home during his later years was Wethersfield, was born in Bristol, Connecticut on December 26, 1871, son of Alonso and Mary S. (Webster) Bassett. He attended Bristol public schools and early showed an interest in the watchmaking and jewelry industry, graduating from Waltham Horological School where he learned thoroughly the trade of watchmaking. After graduation he spent a short time in the employee of a jewelry store in Bristol, after which he was for thirteen years associated with the firm of E. Gundlach and Company of Hartford. With ample experience and confidence in his abilities, he then established his own retail jewelry firm under the name of M.W. Bassett Company, with headquarters at 1003-1005 Main Street in Hartford, and this business he conducted with notable success for over twenty-five years. His efforts resulted in the continuous expansion of the enterprise, and in its volume of trade.
In 1931, Mr. Bassett disposed of this prosperous business with the idea of devoting himself to the development of a considerable property he had acquired at Oswagatchie Hills in the Town of Niantic, Connecticut. There he built and sold a considerable number of summer cottages. Having spent many summers there himself and becoming very fond of the location, he put his best efforts into making this a pleasant, restricted residential community, and he had seen it grow to fair size before the limitations in building operations during World War II hampered his program. Although Mr. Bassett had long called building his hobby, it proved to be a rewarding and profitable full-time occupation.
Mr. Bassett was a member of the post of the Spanish-American War Veterans, having served in Company K, First Connecticut Volunteer Regiment, in the Cuban conflict. He was affiliated with the Free and Accepted Mason, had advanced to its higher bodies, and held the Thirty-second degree, being a member and past potentate of his temple of the Ancient Arabic Order of Nobles of the Mystic Shrine. In his political views he was a Republican.
On February 10, 1897, Merton W. Bassett married Lillian C. Johnson, daughter of Asahel M. and Nancy Johnson of Terryville, Connecticut. For many years Mr. and Mrs. Bassett made their home in Hartford, but after his retirement from the jewelry business, they removed to Wethersfield, which was their home for nearly a score of years. There the commercial leader and realtor died on January 25, 1950.

George Ogden Bassett descends from #1A William Bassett of Plymouth as follows: 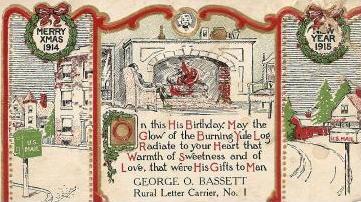 Neal Bassett descends from #8B John Bassett as follows:

One item of note from his biography is another reference for his family being related to Richard Bassett of Delaware, a signer of the U.S Constitution, although the exact relationship is not given in the article.

In all Newark there is probably no man who gives closer application to his job than does Neal Bassett, president of the Firemen's Insurance Company. Out of this has come a legend which Mr. Bassett resents very keenly - that the Firemen's is a one-man company.
"That imputation is unjust to the directors, other officers, and employee of this company," said Mr. Bassett one day last week. "All have worked in advancing the company to its present position. I admit, however, that the Firemen's Insurance Company is my chief interest, and believe that no man can achieve success unless he spends himself in his chosen field of endeavor. It is true that I frequently work long hours, but I enjoy doing it. While I had a vision some years ago of what this company could eventually develop in business, it could not have been brought about without the loyal support of my associates."
When Mr. Bassett joined the Firemen's in 1901 the premium income of the company for the year previous was $350,000, and by January 1, 1916, it had reached $2,725,240. Last year with its affiliated companied it was $25,001,307. These figures may explain why Mr. Bassett has become one of the leading fire underwriters of the country.

Mr. Bassett inherits a liking for hard work. His father and grandfather were physicians and the latter was a noted practitioner and writer on medical topics of his time. In fact, Dr. William Osler wrote a book about him. The family are descendants of the family of Richard Bassett, of Delaware, one of the framers and signers of the Constitution of the United States. Most of the descendants lived in the South, and it was in Huntsville, Ala., September 3, 1871, that Mr. Bassett was born. He was educated in private schools in the South and went to work at 20 as clerk in a local insurance company in Waco, Tex. Thus he has been engaged in fire insurance all his business career. He spent seven years in Waco and in 1898 became a special agent for several insurance companies, with his office in New Orleans and Waco. Shortly afterwards he moved to Chicago, and it was in 1901 that he was offered a special agency of the Firemen's. The offer came through Daniel H. Dunham, the president, and Charles Colyer, vice president, and Mr. Bassett made his first trip to Newark to see them.
In spite of the fact that the company's premium income for the previous year had been only $120,000 in the seven states of the middle western territory he took over the field. In 1910 he was made manager of the western department at Chicago, and in 1914 he was elected a vice president but continued to make his headquarters in Chicago, with frequent visits to Newark. In 1923 he was made president and moved here.

The remark that "It is Mr. Bassett's Company" may be a true characterization after all, when speaking of the remarkable growth of the company's business, for it was he who conceived the idea of buying well-established smaller companies for consolidation.
In 1916 the Firemen's bought the stock control of The Girard Fire & Marine Insurance Company, of Philadelphia, and The Mechanics Insurance Company, also of Philadelphia. Since then control has been purchased of five other companies - National-Ben Franklin of Pittsburgh, Concordia of Milwaukee, the Capital and Underwriters Fire Insurance Companies of Concord.
Last month the company put out the largest stock issue ever authorized by a local company, increasing the capital from $5,000,000 to $7,5000,000 through the issuance of 50,000 shares of a par value at $185 a share. The time was none too propitious for new financing and $9,250,000 is still a considerable sum for Newarkers, even in these prosperous days, but stockholders may be interested to know that only about 150 shares were left unsubscribed. This is considered a remarkable record in view of the fact that stockholders had less than two weeks to act.
It seems only a few years ago - it was in 1909 - that the famous Firemen's building was completed at the corner of Broad and Market streets. Mr. Bassett had not been here long before he saw the need for expansion and he sponsored the plan for selling the "Four Corners" building. The transaction netted the company a sum sufficient to build its present home on Park place and have something left besides. The building has been occupied only two, but work will soon start on a three-story addition by which it will be possible to double the number of employees.
The company has 500 clerks in tis main office, 300 in Chicago, 150 in San Francisco and also maintains a large office force in Toronto.

Nothing to Do Except Work

Mr. Bassett never married, which may explain why he can spend so much time at his office. He makes his home with an aunt at 174 South Mountain avenue, Montclair. Although he does not take the time to play golf he is a member of the Montclair Golf Club. His other club affiliations are the Essex and Down Clubs of this city, Downtown Association and Lotous Club of New York and the Chicago Club of Chicago. He is an officer and director of the fire companies affiliated with the Firemen's and a director of the National State Bank, Montclair Trust Company and the National Commercial Mortgage & Title Guaranty Company. He is a trustee of the Newark Museum Association and a director of the Chamber of Commerce.
Mr. Bassett is an unusual executive in that he does the opposite to what efficiency experts advise. He believes that his desk is to put things on and not to store them away. He keeps his spacious desk empty, he says, but he likes to have in sight anything unattended to. When he finally gets through with the data it is filed away, but until then he can't fool himself by pretending the work is finished because it is in a desk drawer, out of sight.
However, what is most striking about this man from Alabama who has had a part in one of the business romances of Newark - it was nearly fifty years old when Mr. Bassett joined it - is his unfailing courtesy. Engaged in one of the most competitive undertakings, calling for many quick decisions every day, Mr. Bassett appears to the visitor as a gentleman in business.

The following family lines have been combined/eliminated since the last newsletter.

323B. Oliver Howard Bassett of Galveston, Texas combined into the William Bassett of Plymouth family.

No new DNA results to report this month.